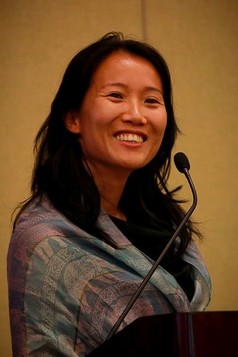 Tanja Lieuw was born and raised in Suriname, as the second generation of Chinese immigrants, and is proud of her heritage, which also is a sign how culturally diverse Suriname is.

After high school, she graduated from Delft University of Technology with a degree in Hydrology. Tanja has worked for 6 years in Water and Sanitation, including for the National Water Supply Company, after which she switched to an environmental related job at the United Nations Development Programme. Growing up in the greenest country on Earth (with 93% forest cover, the highest as she declares!), Tanja has not always been environmentally concerned as she is now. But that changed after her study period in the Netherlands for 6 years, where she began to appreciate what the LAC (Latin American and Caribbean) region has to offer, in terms of biological diversity and the tropical climate. In her previous positions, she collaborated a lot with community based organizations and individuals contributing to sustainable environmental management, each in their own way.

Tanja has travelled extensively in the forests of Suriname, visiting remote Indigenous and tribal communities whose lives are intertwined with nature. Finding a balance between human activities and nature is also applicable in her current position, at the National Institute for Environment in Suriname. In this position, she is involved in the national REDD+ project for Suriname (Reducing Emissions from Deforestation and Forest Degradation), which aims to find the balance in economic activities and sustainable use of our forests. During her first years working in the environment, she decided to pursue another MSc degree (completed in 2015) that enables her to further enhance her knowledge on biodiversity and other topics such as climate change.

Tanja has a PADI certificate, and although Suriname does not have a marine wildlife, the coast is characterized by the sediment streams from the Amazon, making it very fertile with mud and sediments, She loves to dive and explore the world hidden below the sea level in the Caribbean region.

Tanja is an active volunteer for the Green Heritage Fund Suriname, and is responsible for coordinating the establishment of the first ever Xenarthra (sloths, armadillos and anteaters) rehabilitation center in Suriname! Construction is almost finished and they are focusing on fundraising to cover additional expenses for the center to be fully operational by June 2017.

She is excited to have been selected for the CLiC programme, and hopes this sets an example for more Surinamese people to apply for future CLiC programs. She is looking forward to establishing regional networks, and exchange views with people from different backgrounds and countries!