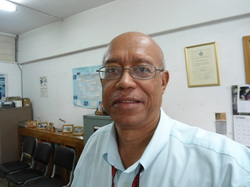 ﻿Dr. Karl Antony Aiken holds a Ph. D. in Zoology and is a senior lecturer at the University of the West Indies (UWI), Mona campus in the Faculty of Science and Technology. He specializes in all things marine, but particularly Fisheries & Management of fishable resources, and has given 35 years to the teaching profession at the tertiary level during which he has guided numerous students through post graduate studies. Some of his most recent work includes research on Green Energy Aquaculture (2014), Jamaican Sea Cucumber Surveys (2014/2015) and a 2014 co-authored scholarly publication on "Spearfishing: a potential threat to fishery sustainability in Jamaica: A survey of 23 beaches". Looking at the last 15 years of his career, Karl has contributed over J$30 million dollars in grants to UWI.
​
In addition to his association with CLiC, Karl wears many hats. He has membership to and sits on the board of several committees and organizations both government and non government, marine and terrestrial. His wealth of knowledge and experience in fisheries ecology, policy and management has led to him being utilized as a resource personnel and expert consultant in many forums, locally and internationally, including the International Union for the Conservation of Nature   (IUCN) Red List Marine Tropical Atlantic Fish Species, FAO’s Fisheries Department, and the United Nations World Ocean Assessment.  He also proudly served in the Jamaica Defense Force Coast Guard (Jamaica National Reserve), as a Commissioned Officer, Lieutenant (j.g.) for 11 years and boasts a Silver Musgrave Medal for Science from the Institute of Jamaica for his outstanding contribution to fisheries research since 1971.