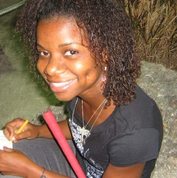 Carla Daniel is deeply passionate about species conservation in the Caribbean, especially in her native island of Barbados. While in comparison to other islands Barbados may be considered species poor, it is an important nesting ground for the critically endangered Hawksbill sea turtle. Starting in 2006, Carla has dedicated her time and efforts to the conservation of this species through her work with the Barbados Sea Turtle Project, where she is currently the Deputy Field Director. Between beach patrols and turtle monitoring Carla found the time to pursue a graduate degree. She is on the verge of completing an MPhil degree in biology at the University of the West Indies where she investigated the monochromatism of the Barbados bullfinch. She even found time for doing more work on other species, participating in projects collecting data on bats, geckos, and arachnids.

Believing education, awareness, and empowerment to be key to conservation, Carla has worked on a number of educational programs; hosting local television series and delivering public presentations. All done with the aim of increasing the knowledge of and appreciation for their environment, in kids and adults. Carla has found her calling in conservation work and research in the Caribbean. Her next step is doctoral studies, through which she hopes to increase her knowledge and skills so she can be of further benefit to biodiversity and habitat conservation in the region.