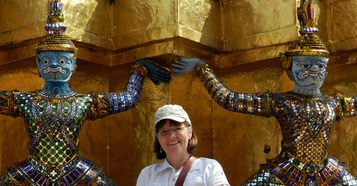 Dr. Easter-Pilcher joined the faculty of St. George’s University (Grenada, West Indies) in December of 2008. She is currently the Senior Associate Dean in the School of Arts and Sciences and held the position of Chair of the Department of Biology, Ecology and Conservation from 2009–2013.  Prior to her appointment at St. George’s University, Dr. Easter-Pilcher held a tenured position as Professor of Wildlife and Conservation Biology in the Department of Environmental Sciences at the University of Montana-Western.  She was also the Chair of this department for two years.

Dr. Easter-Pilcher received her B.A. from Bowdoin College in Brunswick, Maine.  She earned her M.Sc. in Wildlife Biology from the University of Montana in Missoula and in 1993 earned her Ph.D. in Biological Sciences (Conservation Biology) with a supporting doctoral designation in Statistics from Montana State University in Bozeman. In 1995, Dr. Easter-Pilcher was awarded a Postdoctoral Research Appointment in Wildlife Ecology from Purdue University in West Lafayette, Indiana.

Dr. Easter-Pilcher has an ongoing commitment to experiential teaching and learning and to undergraduate student research focused in marine, wildlife and conservation biology. As a faculty member at the University of Montana-Western (UMW), she was a co-author on a successful grant proposal that allowed UMW to run a two year pilot project assessing the efficacy of one class at a time (block) scheduling.  The campus changed completely from a traditional class schedule to block scheduling at the end of the pilot project.

Dr. Easter-Pilcher has also been successful in obtaining grants for a variety of research efforts in wildlife and conservation biology.  Her research has included snare-trapping and radio-tracking grizzly bears (Ursus arctos horribilis) in northwestern Montana for an aversive conditioning research project (featured in National Geographic); lead scientist for a riparian biodiversity restoration project effected by the re-introduction of beavers into the Volga-Kama National Nature Preserve in Tatarstan, Russia; and research assessing riparian ecosystem changes driven by the reintroduction of a top predator, the gray wolf (Canis lupus) to Yellowstone National Park.  Dr. Easter-Pilcher was also a biological and statistical consultant on a research project examining the effects of human activity and environmental variability (climate change) on Adelie penguin (Pygoscelis adeliae) population declines in Antarctica and was a lead scientist on a research project assessing how best to manage forested ecosystems, across a range of spatial scales, to ensure recovery and maintenance of native biological diversity in Indiana.

1)  Modeling sea level rise impacts on mangrove distribution and use by migratory birds.

Dr. Easter-Pilcher also serves as a delegate representing the country of Grenada at the Convention on International Trade in Endangered Species of Flora and Fauna (CITES).