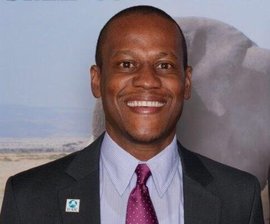 ﻿Kelvin Alie joined the International Fund for Animal Welfare (IFAW) in 2001 and currently serves as the Vice President, Conservation and Animal Welfare. A conservation professional for more than 15 years, Kelvin is leading the global expansion of IFAW’s wildlife trade program across its fifteen regional offices to stop poaching and illegal trade of high-valued wildlife species and engaging efforts to better integrate animal welfare and conservation into national and international wildlife trade policy and decision making.

Under his leadership, IFAW has expanded its role in international wildlife trade issues through:

Kelvin has worked across various programs in IFAW, was the IFAW representative on the steering committee of the US Bushmeat Crisis Task Force (BCTF), has led IFAW’s delegation to the Convention on International Trade in Endangered Species and served as one of the advisors on the pilot Caribbean Emerging Wildlife Conservation Leaders Program 2012-2014. He is the recipient of the award for excellence in wildlife enforcement by the New York Wildlife Conservation Film Festival and currently serves on the OECD task force on illegal trade in environmentally sensitive goods.

A native of Dominica, Kelvin holds graduate degrees in Biodiversity Conservation and Economics and has held previous wildlife protection and management positions with Dominica Forestry, Wildlife and Parks Department.