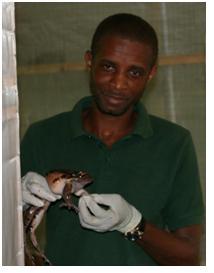 Machel has been employed with the Dominica Forestry, Wildlife & Parks Division for the past three years. He started off as a Forest Trainee to understudy the senior forest officers in carrying out their duties such as forest, rivers and sea coast patrols, limit illegal hunting of wildlife animals, and identify forest tree species. Currently he holds the position of Amphibian Technician on the Mountain Chicken Project, where he carries out the day to day running of the captive breeding facility. This project is extremely important as the population has declined 90% in the last ten years and this species is now critically endangered according to the IUCN Red List. The main threats are human consumption and the fungal disease chytridiomycosis.

Machel is also responsible for organizing outreach events, school presentations and field monitoring/surveys with the aid of a Zoological Society of London volunteer. This course will provide him with an opportunity to broaden his knowledge in how to carry out proper management practices in conserving endangered species. It is Machel’s hope to deepen his knowledge and skills which he can apply to our ongoing mountain chicken captive breeding project in Dominica.