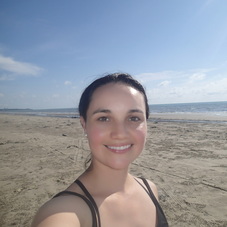 Luz Helena Rodríguez-Vargas received her Bachelor’s degree as a Marine Biologist from the Universidad de Bogotá Jorge Tadeo Lozano, Colombia. To obtain this title she presented her final project, characterizing the vocalizations of the Tucuxi (Sotalia fluviatilis), a freshwater dolphin from the Amazon River. She has been working as a consultant and as a marine mammal and fauna observer since 2008.

Currently, Luz is a Master’s degree candidate in Marine Science at the Universiti Sains Malaysia. Her research is focused on setting the scientific baseline of the small cetaceans inhabiting Penang, an island in west Malaysia. The results also include the first description of the resident population of Irrawaddy dolphins (Orcaella brevirostris), a rare species, and endemic of Southeast Asia. As local knowledge was used as a part of the investigation, she also had the opportunity to interact with the local communities and established a good relationship, which was critical to obtain robust information, and increase awareness among people.

Luz is a co-author in the publications “Local community knowledge of Penang’s marine mammals,” and “Community management strategy for conservation: implementation of the conservation agreements model in Colombia”, and collaborated with data for the publication “Cutaneous nodules in Irrawaddy dolphins: an emerging disease in vulnerable populations”. Her Master’s research results will be submitted for publication soon.

Luz is a member of the Sociedad Latinoamericana de Especialistas en Mamíferos Acuáticos (SOLAMAC), the Society for marine mammalogy, and the Society for conservation biology. Her belief is that online social networks are powerful allies in the protection of the Ocean; with the intention of increasing the knowledge among Spanish speakers, she therefore shares news and relevant information about cetaceans in her Facebook page called “Marsopas, Delfines y Ballenas.”  She shall soon be moving to the Colombian Caribbean coast where she plans to replicate the research conducted in Malaysia.