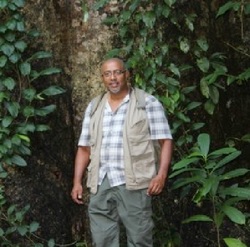 ﻿Romano Macfarlane is a Wildlife Biologist and Head of the Wildlife Section of the Forestry Division in Trinidad from March 2011. His responsibilities include wildlife research and wildlife protection. He is a member of the Wildlife Conservation Committee and Chairman of the Honorary Game Wardens’ Committee. Prior to this position he has worked in several capacities including within the tourism sector as a hotel Night Auditor, the Ministry of Education and the Ministry of Science, Technology and Tertiary Education as a Program Coordinator for similar job training programs, the Ministry of Social Development as a Regional Coordinator for a human development program and the poultry industry as a Production Technician.

He started the Tobago arm of the Trinidad and Tobago Field Naturalists in 1991. He has obtained a BSc in Biology from the University of Winnipeg in 1987, a BSc in Agri-business Management from UWI in 1996 and an MSc in Tropical Animal Science and Production from UWI in 2000.