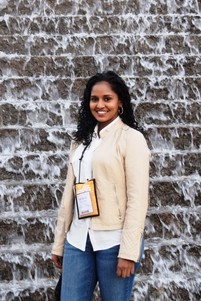 Ashana Gibran was born and raised in Trinidad. As a child, her parents would take her to the forests and swamp to take part in animal observation and data collection for scientific reasons. This influenced her passion for animals and she knew even then that a career involving animals and wildlife conservation would be her path in life.

In 2010, Ashana graduated from the University of the Southern Caribbean with affiliations from Andrews University, Michigan with her BSc. in Biology and Chemistry, with an emphasis in Zoology and Animal Behaviour. She is presently completing her MSc in Coastal Engineering and Management from the University of the West Indies. She is also pursuing part time studies in Animal Husbandry and Behaviour from San Diego Zoo Global Online Programme. She is a member of the Manatee Conservation Trust of Trinidad and Tobago and a Rotarian.
Today, Ashana is the Biologist at the Emperor Valley Zoo, Trinidad. She is involved with animal training and behaviour of the giraffes, tigers, lions and otters within her immediate care. She also coordinates the rehabilitation and reintroduction of injured wildlife species into the wild, as well as assist with the Zoo’s education programme.

In addition to her background, Ashana has had the opportunity to undergo several training attachments within the past 7 years. She has gained valuable knowledge training at the National Aquarium in Baltimore, the Smithsonian National Zoo in Washington DC, Maryland Zoo in Baltimore, Denver Zoo and Aquarium in Denver, Cheyenne Mountain Zoo in Colorado and the Guyana Zoo. She has also participated in animal training exercises at the Otter Keeper Workshop, Animal Behaviour and Training, as well as at the Association of Zoos and Aquariums Annual Conference from 2013 to 2016.
​
Her goal is to further her career and make a positive impact on the conservation of wildlife especially otters.