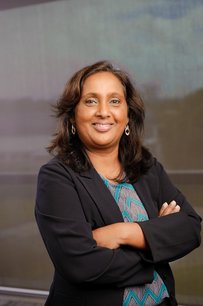 Nadra Nathai-Gyan (CLiC Coordinator) is a graduate of York St. John University, UK with a Master of Arts in Leading Innovation and Change and of the University of the West Indies in Zoology and Botany and post graduate courses in Environmental Biology.

In June 2016, she was appointed as the Chairman of the Environmental Management Authority (EMA) of Trinidad and Tobago and as a Director on the Trinidad and Tobago Civil Aviation Authority.  In addition to serving at a national level, she is also involved in community service as the President of her Rotary Club. Her current job involves consulting for the Zoological Society of Trinidad and Tobago on conservation matters. Just before taking up the leadership role at the EMA, she also consulted on a national wildlife survey coordinated by this entity.

Nadra has many years of experience in wildlife management having worked for 20 years at the Forestry Division of the Government of Trinidad and Tobago, serving as Head of Wildlife for the last 13 years of her employment. During this time she administered wildlife and wetland conservation programmes, including the related Conventions of CITES and Ramsar and provided secretariat duties for the Cabinet-appointed Wildlife Conservation, Honorary Game Warden and National Wetlands Committees. Some of the well-known projects in which she was involved are the Nariva Swamp Restoration Project and community co-management of the endangered leatherback turtles. She has authored either singly or jointly, papers on a range of wildlife and wetland related topics, delivered lectures/presentations, as well as facilitated workshops and seminars in this area of specialization.

She is also well-known in the Caribbean, through her work with MEAs and having taught in the 1980s and 90s, many of the regional foresters at the Eastern Caribbean Institute of Agriculture and Forestry.

Nadra served as one of the advisors on the pilot Caribbean Emerging Wildlife Conservation Leaders Program 2012-2014, as the coordinator for Cohort I of CLiC and is pleased to continue in this role for the current Cohort II.